Ignorance is bliss – until you realize you are ignorant.

Ignorance, the lack of awareness or knowledge about something in particular, makes up most of who we are. We are all ignorant about most things at some level. To quote the great philosopher Thomas Dolby.

What is it about ignorance that is so blissful?

A friend of mine, Alex, recently turned me on to a cognitive bias that I sensed existed but never knew it had a name. It’s called the Dunning-Kruger Effect (DKE). 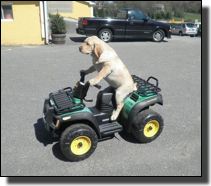 The DKE explains why unskilled people think they are better at something than they actually are. It’s at the heart of why 93% of American drivers believe they are “better than average”

Unfortunately, the more unaware one is about their skill deficit, the more likely they won’t seek to improve, leaving them in a perpetual state of inferior ability. The cool thing is they are happy because they believe they are better than others. Bliss!

The other finding from the DKE research indicates those that are skilled often lack confidence in their ability and see themselves as less capable than they really are. They credit others with having greater skill than is warranted.

This can be a very dangerous situation when building teams. Every team I have ever built has a wide range of abilities. I’ve never had a team with 100% rock stars. The challenge comes when those that are weaker start to believe they are one of the rock stars – that’s when their ability to grow stops.

When I choose junior associates, I do so based not on their current skill, but on their potential growth. If they believe they are better than is warranted, I have to do something about that.

The Conscious Competence Matrix is a helpful graphic that depicts the states that exist in learning. It basically matches a given skill against how aware you are about that skill. 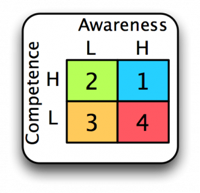 We are all in a perpetual state of learning. Any given skill can be mapped to a place on this grid. The hard part is moving from Q4 to Q3.

Those that I mentioned earlier as less skilled and ignorant of their abilities live along the Q3/Q4 line. If however they believe they are in Q2, very little progress is made in their development. The key, therefore, is to bring awareness by getting them comfortable with Q3. 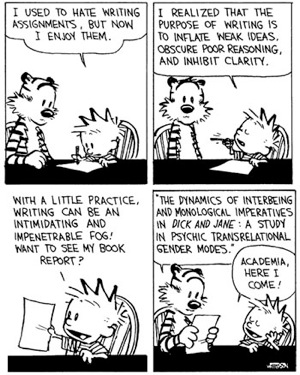 When I originally started writing this column, I was blissful. I thought I could write, so I did. A few years later, I was asked to write a weekly blog on innovation as part of my job. I was nervous – know I was going to be judged by people that could actually affect my career. I needed help.

I enlisted the help of one of the best writers I know, Karen, to review and edit my work before it was published. Actually, I was so nervous I used two editors, just in case. Karen is a dear friend so I knew she would be gentle, but would also care enough to make sure I wouldn’t embarrass myself.

To say that I dreaded the first few weeks of edits is an understatement. Clearly I have no business writing – but I had to in order to reach my audience. I faced my Q3.

I’ve learned so much in that time, but still have not become competent. I know where my natural weaknesses are, embrace them, watch for them, and know how to self-edit certain problem areas. I know there is still a ton of junk in Q4, but Karen is helping me to slowly expose those.

I don’t have the luxury of having Karen available for the Starfish. Every week it goes out I know I am going to regret all the grammatical mistakes that were made. I’m ok with that. It’s in the comparison of the two columns that I vividly see where I can grow. I now see my abilities more realistically.

This is where true leadership comes in. How do you persuade a person to expose himself to all that he doesn’t know and yet not swamp him with feelings of inadequacy or that the mountain to climb is too great?

How about teaching them about the matrix? Indicate that most failures (surprises) come from staying in Q4. The other set of failures come from not spending enough time in Q3. Teach that Q3 is a glorious, if not scary, place. It’s where you gain control over the surprises and then consciously get control over what you want to be good at. Develop systems that help people expose all that is in Q4.

Get them a Karen.