It’s been a difficult week – a week of highs, a week of great introspection and a week where I discovered something very painful about my role here. To get to this discovery, I need to introduce a little bit of history.

Thirteen years ago I became the first engineering manager at a very small startup called Internet Security Systems. Like many startups, it was the wild west of times. We were brash, confident to a fault, energetic, willing to do whatever it took to conquer the world. It was the definition of reckless abandon. 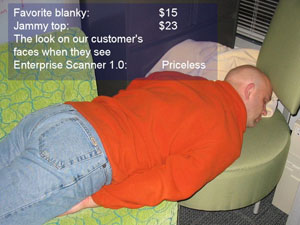 Over time we tempered some of that recklessness and became more of a business, that is if you consider tarantula dens outside the president’s office, cubes dressed as shower stalls and “Bldg B3 – Bathroom” addressed magazines being delivered directly to the men’s restroom as normal business protocol. Yes we were quirky and yes sometimes we crossed the line but we delivered great products.

In those days we acquired several companies. Each of those companies were instantly brought into our culture and each one embraced it fully. It was always tradition for the acquired management team to drink champagne from the purple shoe (an ISS tradition) to demonstrate that they were one with us and our odd traditions.

Fast forward to three years ago when a very large and well respected company, IBM, acquired ISS. By most this was seen as a great acquisition as they had the scale we needed to fuel the next growth spurt and we had the exact products they needed to fill in their gaps.

So on that first day do you think that our ISS management team stood before the world and perform a gesture symbolic of the IBM community? No and not because we were rude and arrogant, but because IBM was well aware of our culture and wanted to keep it intact. They even insisted that we keep the shoe purple rather than change it to blue. This was seen as a very positive indicator that maybe we weren’t going to lose our culture. We arrogantly thought that maybe we could even spread some of our culture to the rest of IBM.

Now take one more fast forward to this week, a week where I tendered my resignation to take on a new and exciting chapter in my life. In taking a look back at the past three years I can say without doubt that we have failed miserably as an acquisition. We stand here today broken from trying to intertwine these two radically different cultures. We have given up on trying to let the new Army recruit exist as they were and have today decided it was time the soldier become Army green. I wholeheartedly support this move and believe that had it been done when we were acquired that things would be much different now.

I mentioned that this week was difficult especially when it dawned on me how I had contributed to this failure. It came to me as I kept hearing from many of my coworkers that they were sad to see me go as I was the last icon of ISS and that ISS was now officially dead. At first my pride took over and I felt great knowing that I was associated with the fun, energy, creativity and dedication that was ISS. I then felt a little sad because I knew they still wanted what ISS was.

As I left work yesterday all of that pride and sadness turned to guilt. I realized that I was one of the reasons that ISS had not become IBM. I was one of the icons that gave people hope that we could still be ISS, but that is one of the chief reasons this acquisition has not yet lived up to its potential. Not because I had failed to deliver but because of what I represented. 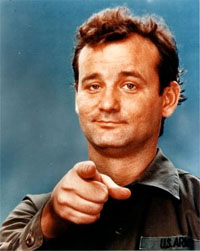 Did you ever notice in history when one country acquires another the first thing they do is to exile (or kill) the leaders and destroy any icons that remind people of the past? The more different the two cultures are, the more important those acts become. IBM did a brave thing and tried to keep the icons as they wanted what ISS used to be. I think they truly believed that Bill Murray would be able take the EM-50 into Czechoslovakia and help the Army defeat the bad guys.

It’s a great movie. Both sides win in the end.

Today’s Question
If you were IBM, how would you have handled the acquisition of a company steeped in its own culture?