One in a Million?

Did you ever meet one of those people that after only a few minutes of conversation you get so wrapped up into what they are saying that time disappears? I’m not talking about a romantic attraction but someone that grabs your heart in a very different way – in a way that takes you out of the struggles of everyday life up to a higher ground. I did this week and her name was Mary Alice.

Sitting in a window seat on a very full flight from Detroit to Orlando an obviously very harried woman with two kids in tow sat down in the center aisle seat. Ugh – I was really hoping for some elbow room. Mary Alice had a hard week in

front of her as her husband had to work and she boldly decided to take her kids to Disney World by herself. We all know the exhaustion that she was going to feel by the end of the week. So did she.

Mary Alice and I started a conversation midway in the flight with the usual “So what do you do?” Turns out she was a former investigative reporter that later became a television producer in Cleveland. After getting tired of the sensationalism that her industry became she discovered that she had a great gift for helping families adjust to life in foreign countries. She now runs a successful consulting business where companies hire her to help their employees on foreign assignment acclimate and adjust to their new environments. It is a subject that I find completely fascinating and I could tell she was fantastic at her new found career. I learned so much, but that’s not the story.

Mary Alice, much like my wife, has a special gift for making people feel good about themselves. I can’t describe how she did it. It may have been the simple words of affirmation or maybe the cute little elbow nudge that she would give that was usually reserved for closer relationships. It may have been the way she took time to teach me some really cool concepts about human nature. Maybe it was the way she looked intently when I was talking about something that I was passionate about. It was probably all of that and a lot more. The bottom line is that she had an incredible gift.

When we finally landed in Orlando I was still at 35,000 feet off of the ground.

She then told me about a story about a pretty remarkable coincidence where she ran into someone she knew from a long time ago in a very unexpected place. Apparently this old friend told her a story about how influential she was in her life and that she always wanted to thank her for that but didn’t know how to get in contact with her. Mary Alice then turned to me and said, “Wow, what are the odds of meeting a person I knew from my past that I had affected in such a positive way – one in a million?”

I thought about that for a minute. Ok, one in a million if you consider that one individual. However as an investigative reporter, a television producer, a cultural consultant, mom, wife, and friend to many she probably came into contact with thousands and thousands of individuals. I’ve got to believe that because of her incredible gift that the vast majority of them were affected much like the distant friend and I were.

“Mary Alice”, I said, “I think the odds were much less than that. Probably more like 5,000 in a million.” After explaining the logic behind the calculation, she just sat back and was for the first time speechless. It was at that moment that I think she came to realize how special she was and how her life had significant meaning. I am confident that many others have told her that but I had the unique vantage point of being a complete stranger with nothing to gain. 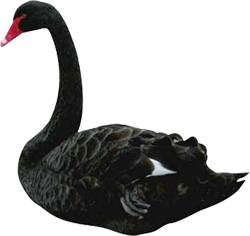 She was my age, somewhere in our later 40’s. This is the point in time when you start to look at your legacy. What have I done that has permanence? What is my destiny, cause and calling? Getting independent affirmation that you have made a difference is complete gold to us and the look on her face confirmed that.

Coincidences seem much more dramatic when they are considered in isolation – they seem like black swans. However when you consider the repetition of behaviors the odds improve dramatically. While I do not believe in the principles of Karma, I do believe that the more good you do in the world, the more likely it will be reflected back to you at some time in what appears to be some random way. To me that isn’t Karma, it’s simply math.

I gave Mary Alice the link to The Stranded Starfish and hope that she gets a chance to hear another story of how she has positively affected another person. I hope that we randomly meet again someday so that I can tell her what a lasting impression she made on me. What are the odds?

Today’s Question
Do you have a Mary Alice encounter in your past?