The Invisible Hand of Motivation

Several months ago I was on a phone interview for a job when the interviewer asked “How do you motivate your employees?” In a moment of mouth before brain I responded with my initial thought, “Why? Are your employees not motivated?”

I went on to explain that when a leader tries to motivate others they create an artificial system that has to be constantly fueled. If they provided the initial rah-rah fuel, they will be expected to provide the next rah-rah. After a while everyone becomes codependent in a false economy where manager led motivators are the currency. The manager now is elevated to the role of Chief Motivation Officer and is expected to provide everyone’s reason for being there. This can work in very short bursts, but is not a sustainable relationship.

The model I prefer is one loosely derived from the brilliance of the father of our modern free market economic system, Adam Smith. In his seminal writing of the 18th century Smith describes the fundamental tenets of a free market economy.


By [a citizen] pursuing his own interest he frequently promotes that of the society more effectually than when he really intends to promote it. I have never known much good done by those who affected to trade for the public good.

Adam Smith – The Wealth of Nations

Termed the invisible hand Smith believes that the whole is best served when the individuals are free to operate in their own interests. As an aggregate they will come together and do what is best for the system. People are the most highly motivated when they act to serve their own self interests.

While originally an economic model I believe this applies to motivation as well. Systems operate at their highest ability when each individual is allowed to achieve corporate objectives by pursuing their own self interests.

One of the most amazing phrases in the Declaration of Independence is where we are granted not happiness but the unalienable right to pursue happiness. As a leader, recognizing and then providing the freedom for individuals to pursue goals in a manner that is in their best self interest yields the most highly motivated actions.

So if everyone is going to pursue their own self-interests isn’t that chaos? Very possibly – but not if the leader takes on their critical role. Their are four essential actions a leader must do to make this work.

Imagine you are interviewing a software engineer and you’ve discovered that she would someday like to get her Masters degree (step 1). We love people that seek to improve themselves (step 2), but the program and school she is interested in only offers day classes. What if I made her part of our Atlanta based team for a year and if she demonstrated an ability to deliver I would let her be the team lead for our team in India? That way she could work the late night shift, the same time that they are working, and then attend classes during the day. (step 3).

How motivated do you think this future employee will be when you communicate (step 4) your plan to her? You’ve demonstrated that her own self-interests can be achieved if she continually performs. That’s the role of the leader – to provide alignment of personal self-interests with team goals and then to give the freedom necessary to achieve both. 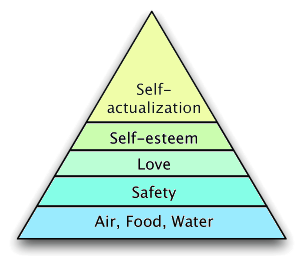 As a leader you need to have a keen sense of awareness of what are true self-interests. They are likely to be things like work-life balance, growth, security (like a good resume), community and purpose. Look no further than Maslow and you will find that many of these themes are played out over and again.

Firing yourself as the Chief Motivation Officer is a key first step to building a highly self-motivated team. Employing the elements above is the next.

Today’s Question
What are some of the key self-interests you have and does your current environment promote the pursuit of these interests?