The Story in Our Eyes 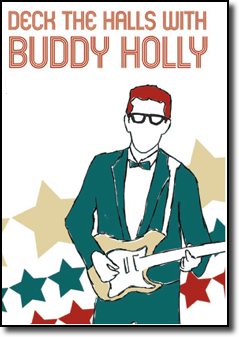 I love a great story. Stories capture our senses. We see pictures painted that we’ve never experienced in person. We hear sounds that may have only passed our ears years ago. We smell a lingering memory of growing up. A great story excites the soul.

But not all stories capture our attention. It’s hard to relate to a story that we can’t picture ourselves somehow inserted into the scenery. I love the thought of my family dashing through the snow in a one horse open sleigh. It makes the story come to life. It’s why Disney scored with tales of princesses and sword battles. We all have a little Walter Mitty in us.

It’s also why the senseless death of 20 children and 6 adults in Newtown this month reverberates louder than the loss of 15,000 in a Bangladesh storm in 2007. Many of us hugged our kids extra hard the night of December 14th because we, but for a fleeting moment, dared to imagine ourselves in that situation. There but for the grace of God go I.

One can also see evidence of relatedness in the story of St. Nicholas, the saint that has “more churches dedicated to him than any other person except Mary, the mother of Jesus”. Our modern day traditions of Santa coming down the chimney and stockings by the fireplace all arose from a simple story of Nicholas anonymously gifting dowry money to a father so that his daughters could marry. Most of us have no clue about any of Nicholas’ countless miracles that earned him sainthood. It’s the aspirational one, the one we could see ourselves in, that formed our modern day Santa Claus. 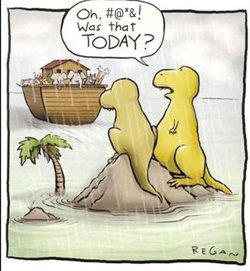 My Christian faith is all about relatedness as well. I am an engineer, one raised in the sciences. I work in a field that has a disportionately large number of agnostics and atheists that all ask me, “How do you explain the dinosaurs?” or, “Seven days – really???”

My faith really didn’t start until the day I came to understand that I was focused on the wrong questions. The dinosaurs were irrelevant until I could first relate to the story. I not only had to know the full story, I had to see myself in it. My first question had to be, “Where and why am I in His story?” Until I could answer this, the dinosaurs would have to wait.

If I cannot comprehend why I need a savior, then Christianity makes no sense at all. If I cannot connect with the pain and suffering of wandering in the desert for 40 years or the total sacrifice and humiliation of being hung upside down on a cross, like Peter, then I cannot grasp the commitment that true faith requires. If I cannot see why I need to continue building my wall, like Nehemiah, despite being called to the King’s palace, then I must first seek to answer, “Why not?” 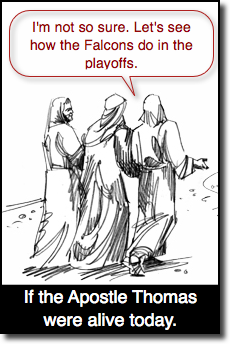 God knew this. It’s why the 12 apostles had so many flaws. It’s why David is so enigmatic. He knew we could see ourselves making the same mistakes. It’s why He sent our Savior not as a king, but one of us – a baby, a rebellious young child, a likely confused teenager and then a carpenter. The story would have been much simpler if our Father had thought that seeing ourselves in His story wasn’t important. He knew there would always remain the questions about dinosaurs and the counting of days, but He had his priorities. Even in Luke’s account of the birth of Jesus he brings up something we can all relate to – taxes.

Years after discovering myself in the greatest story ever told and my subsequent research about the conflict of science and religion, I now have a worldview that allows me to be a man of science and a man of faith. I have no problem accepting the truth about dinosaurs and cavemen any more than I do believing the story of the Creation. Oh, my worldview has lots of holes in it, but I have a name for those holes – faith. That faith was not possible until I saw myself in His story – my story.

Sitting down once again this Christmas season with Luke’s beautiful story of the birth of Jesus, I am gratefully reminded of who I am and why He is. It is a story that celebrates love. A mother’s love, a shepherd’s faithfulness, the adoration of wise men traveling from afar, and most importantly His love – all for me. It is from the simple understanding of where I am in that story that my journey began.

“And the angel said unto them, Fear not: for, behold, I bring you good tidings of great joy, which shall be to all people. For unto you is born this day in the city of David a Saviour, which is Christ the Lord. And this shall be a sign unto you; Ye shall find the babe wrapped in swaddling clothes, lying in a manger. And suddenly there was with the angel a multitude of the heavenly host praising God, and saying,

Glory to God in the highest, and on earth peace, good will toward men.”

Be you Muslim, Jewish, Hindu, agnostic or atheist, I pray that you may discover yourself in someone’s story. Merry Christmas, my friends.