Creativity is a fascinating beast. Some people seem to have it in droves – others, “Bless their hearts” as southerners would say, weren’t so equipped. But what makes a person creative – is it nature or nurture?

The answer is a resounding “Yes?” We all have different physiological profiles that makes us more or less capable, but the people around you have just as much influence on whether you are creative or not. To get to the nurture we first need to step through the nature and a tiny bit of science. I promise it won’t hurt.

You may have heard the expression “scientists have never found a gene responsible for creativity” and it is technically correct – so far. However scientific studies have demonstrated that there are physiological profiles that do exist that make one more capable of being creative. Recent research has shown an interesting correlation between figures known throughout history as being highly creative and a family history of schizophrenia (Picasso, Mozart). The common trait in both schizophrenics and very creative people appears to be what is termed divergent thinking. Divergent thinkers have the ability to generate thoughts that seem at first to have little relationship to the subject at hand and their are often many possible answers to a single question.. People that are very divergent in the way they think are often known to have “low associative barriers” – they see tiny hidden relationships between objects that the rest of us often miss. 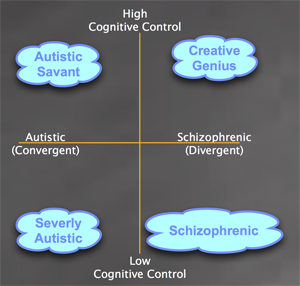 The ability to determine what is relevant is part nature, something you may have been born with. Comedian Ron White tells a story about being pulled over after drinking a little too much. The officer informed him that he “had the right to remain silent.” Ron then reflects on how “I may have had the right to remain silent, I just didn’t have the ability”. While Ron’s affliction was self-imposed, we all have varying degrees of natural cognitive control. Can’t help that much without serious medication.

The nurture part is more interesting as it is where we become part of the story. The ability to determine what is relevant can also be taught and ingrained through years of environmental conditions. Suppose that you were capable of incredibly divergent thought but every time you expressed one of these ideas someone that wasn’t as gifted shunned your ideas or gave you a strange stare? If this continues to happen, over time you will stop expressing those ideas. You may have the ability, but your environment basically told you that you don’t have the right. You are now, in effect, a Creative Zombie.

Having taught many classes on creativity and leading in the engineering field for many years I believe the following relationship to be unquestionably true:

# of Creative Zombies >> # of Flourishing Creators

So many folks for some reason have this belief that they are not creative. You may be one of them. If you are, take a serious hard look at why you believe this to be true. Was it because you were told that you weren’t creative? Did you believe them? Why? How many times a day do you suppress and idea because it seems rather random? What’s the worse that could happen if you opened the flood gates just a little bit more? Keep in mind how many creative things you do every day just to survive.

The reason you probably don’t take the chance on opening the gates a bit is because of your environment. As a society we tend to reward quick, short answers that require the least amount of story to explain. If you provide an answer that is very divergent and has a relationship that only you at first can see there will be a steep uphill climb to promote your answer over a simpler form. That’s why we are a world of sound bites.

Reflect for a moment on how open are you to random ideas. What’s your first reaction when someone says something out of left field? Are your words open and affirming to radical though or do they try to mold thinking into a task driven event?

The hard part of this equation is that as humans we propagate the environments we were raised in. Just like kids that smoke often come from parents that smoked and child abusers were often abused as a child, Creative Zombies create a world of Creative Zombieism. Since the original equation stated that there are way more Creative Zombies than those actively expressing their creativity, this cycle continues to reaffirm this pessimistic nature. Creative Zombies are often their own worst enemy.

So if it is so hard for Creative Zombies to change their world, who is going to do it?

One member of the Flourishing Creators that constantly amazes me is the star of the television show The Dog Whisperer, Cesar Milan. Cesar is worthy of a column all on his own someday, but for now I want to focus on one important concept he taught. In one episode there was a young girl suffering from leukemia that had this incredible desire to be like Cesar. She felt like she could do what Cesar did but didn’t have an environment that encouraged her desires. Cesar brought her on his show and was amazed at how naturally gifted she was. She wasn’t the ones that needed the training. He had to work with her parents to show them her talent and then coach them on how to encourage her.

“We were dealing with people [the parents] that were misinformed. Once they see it they had a transformation. You can’t fight reality. My grandfather nurtured my nature – he believed in my instincts. I hope they realize they have a very special human right next to them and totally allow her to blossom.”

Cesar’s father had no idea what a Dog Whisperer was no more than most of us know if a Creative Zombie has an internal divergent thinking engine. But by “nurturing the nature” Cesar’s father was able to bring out that which was already present, just like Cesar did with the young girl.

It’s that simple. Those that are part of the suppressed collective of Creative Zombies are not likely to be the ones to bring out the creative elements in another, they have little point of reference. It is up to the Flourishing Creators to “nurture the nature” of those around by developing the environments that let them grow.

So this call is to the Flourishing Creators out there – what are you doing to bring out the most creative elements of the teams you lead? Have you labeled each of your team members as creative or non-creative without first nurturing their nature? What environments have you created to promote people out of the the Creative Zombie caste?

Today’s Question
What environments have you seen that maximize the creativity of the entire team, not just the obvious “creative geniuses?”