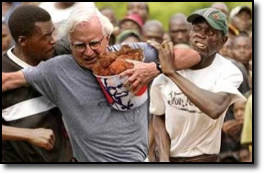 What is the first thing that comes to your mind when I say Colonel Sanders? Chicken, right? How about Hank Aaron, Job, or Debbie “Mrs.” Fields? Despite the incredible complexity and richness of each of these people each are predominantly known for one standout thing.

Unless you are an avid football fan you may not known Rudi Johnson. Rudi is a running back in the NFL that is superior to nearly all other running backs in one way – he hardly everfumbles the ball. In eight seasons and over 1,600 carries, Rudi has only lost the ball 8 times – that’s once every 200 attempts.To give you a comparison, Adrian Peterson, one of the best backs in the NFL loses the ball roughly every 50 attempts.

It’s really not an accident he rarely fumbles as Rudi has made holding on to the ball a priority. He equates a fumble to “dropping the baby – you never drop the baby.” He has a system for holding on to the ball that he calls the iron claw that he demonstrated on a recent Fox Sports show called Sports Science.

Sports Science is a show my son and I enjoy where they apply sophisticated technical machinery and heavy doses of science to help understand the sporting world. On one particular episode they wanted to understand how much force it takes to cause a fumble. To make it entertaining they matched the best with the best. The ball carrier, Rudi Johnson, was lined up against four of the best Mixed Martial Arts fighters in the world. These guys were scary tough.

Rudi had to run through a line where each of these fighters got a shot at punching the football out of his hands. After five attempts by each fighter and an average of 800 pounds of force for each strike, no one was able to punch it through. Then they decided to see what it would take to get the ball loose. Rudi now had to stand in place with one of the fighters taking his clear best shot at the ball. Place your bet – what do you think happened?

I was surprised to see that he dropped it, but did you notice Rudi’s response? He didn’t say “he got lucky” or “I wasn’t ready” or “the ball was wet” or even “let me try that again” – his response was

“Let me see the replay. I got to see how he got the ball out.”

You’ll consistently find this attitude and behavior in the best of the best. There is an internal engine that fuels constant improvement. When they fail their first concern is not their ego or even the failure itself but rather on learning what happened and how to adjust so that it doesn’t happen again.

In Outliers, Malcom Gladwell cites the recently popular “10,000-Hour Rule” which states that in order to achieve world class mastery of a subject you must spend 10,000 hours of deliberate study on that subject. I highlight the word deliberate as it is crucial. Deliberate indicates a purpose or goal and a system to reach that goal – a system that includes how to deal with failures along the way. It’s as much a mind set as it is a discipline. I will bet that early in Rudi’s career his first response to failure wasn’t “let me see the replay.” It took a conscious effort to adopt that mindset. 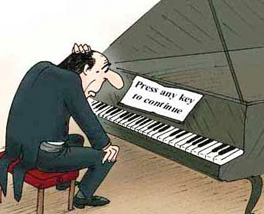 I estimate that I have sat down and played my piano for over 20,000 hours. I am nowhere near master level, but I play well enough for my own enjoyment. I always attempt to get better but not with the deliberation it takes to achieve mastery. Had I spent that time in a system where constant improvement was front and center I would be playing at a much higher level – but I didn’t want to master this field.

However, there are some fields I do want to excel at even if not at a mastery level and I believe the same rules apply. Instead of 10,000 hours I might devote 1,000 hours. Either way there must be deliberate practice, a developed mindset of constant improvement that knows how to watch the replay of my failures and apply them toward my ultimate goal.

In other words, to be as good as you can at something you find important you must be deliberate.

Tody’s Question
What types of practices do you employ or have seen others employ that demonstrate a mindset of constant improvement?