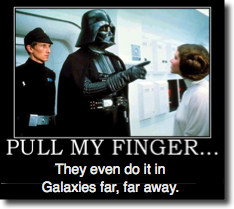 “Joey, pull my finger,” my uncle urged me. I’m not quite sure when that flatulence generating joke began, but it is so classic that it must’ve started about the time that man had a finger and an ability to fart. For me it was my seventh Thanksgiving, when my uncle uttered those four magic words. It was then I knew that I had to find a way to escape the kids’ table and make it to the nirvanic world known as The Table – where Jimmy and the adults ate and pulled each others’ fingers.

The kids’ table at our house was a red-legged folding table with a flimsy tabletop that resembled a pegboard without any holes. I never understood why the wildest of all beasts were put at the weakest of all tables. This year, I wouldn’t have to worry about that. I was sure that after sharing in the rite of the finger pulling that my uncle would invite me to join him at The Table. No more flimsy metal legs. No more childish conversations. No more airplane sounds as the spoon entered Eddy’s mouth. Yep – this was the year that I said niños adiós and hola adultos!

Disappointment reigned for another two years as the overlords of our house consistently rejected my preferred seating request. My uncle apparently lacked the clout to get someone else bumped or couldn’t adequately pitch how my wit and art of conversation would clearly benefit those seated at the table.

Then my big break came. One of our invited guests couldn’t make it and I got the call to the big table. I was only 10. Jimmy didn’t make it until he was 12. I beat him by two whole years. What should I wear? What would we talk about? Quick, I had to find my copy of Bennet Cerf’s Book of Animal Riddles so that I had some conversation starters. What if I bomb and they send me back down to that pegboard monstrosity with nose-picking Jeremy? 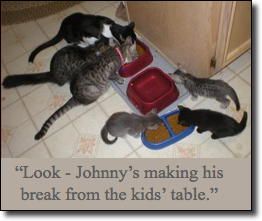 It was a high high that was only matched with an equally low low later that evening. The Table was a con game. It was a meeting of boring people that had assigned seats. They talked about things they were thankful for like a promotion at work, neighborhood friends, and their health. Food came in order, right to left only mind you, and you dare not say, “No thank you” when the Black Eye Pea Surprise Casserole came into your possession. I learned that the hard way. How was I to know that it took Aunt Jenny 6 hours to make that? Does she know that it only takes two minutes to make a delicious hot dog in the microwave? Where were the hot dogs, by the way? How about the fart jokes? Why wasn’t anyone pulling someone else’s finger?

It was then that I realized I was longing for something that I really didn’t want. I wanted to be one of them. I desired what I couldn’t have only to eventually long for what I used to have. I missed the milk spewing from Jeremy’s nose when he laughed. I missed the wobbly legs of the table. Heck, I even missed the sound of Eddy’s airplane. Those were the days. 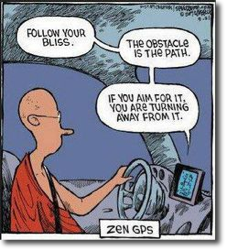 In my 40 years hence, I have often repeated this cycle of longing for something in the future or a return to the past. Never once has it added to my happiness. My current happiness is only defined by this very moment. A moment only lasts so long. The more I spend reflecting on what I once had or what I could have, the less time that moment has to be in it.

I was talking to my wife, Beth, about my desire to be seated at the kids’ table this year. She dutifully pointed out that there were only seven of us this year and that our kids were now adults. There wasn’t a need for a kids’ table. Plus, you can’t go back, only forward, and only from this moment.

“But,” she said, after seeing a bit of dejection on my face, “there’s no reason we couldn’t make our table the kids’ table.” It was then I recognized Beth’s incredible ability to constantly create new moments. 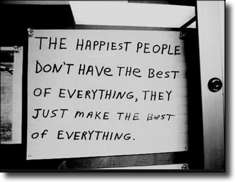 As I, like many others, sit in my moment of thankfulness today, I will not be thankful for the past, for that should have already been done. I will not be thankful for what might come, for that too will have its time. I will be thankful for this moment. The one that allows me to inhale and exhale without thinking. The moment that allows me to be in a state of health that I still have memory of the past. The moment that still gives me hope that what I believe of the future will come to pass. This moment that my fingers touch this keyboard and write something called a “blog” knowing that I have lived, survived, and adapted to a very fast changing world.

I am also thankful that we no longer have the recipe to Aunt Jenny’s Black Eye Pea Surprise Casserole.